Turkey’s Perception of China Before and After COVID-19 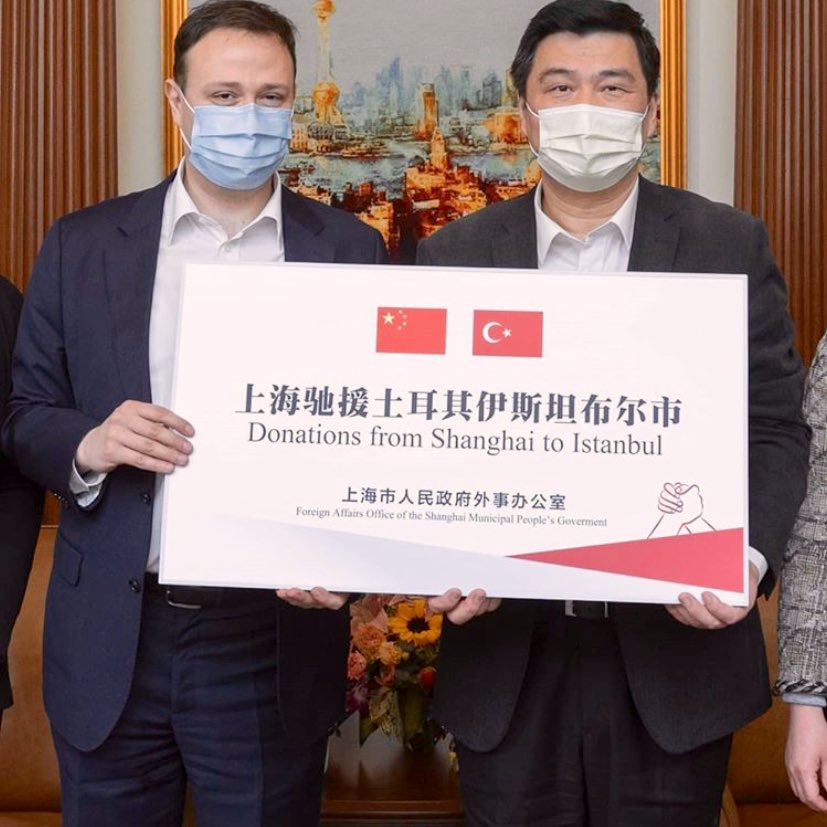 Since the first COVID-19 cases in Wuhan, the virus quickly spread around the world. Turkey has been one of the hardest-hit countries. As of July 26th, Turkey ranked 16th in the world with 226,100 cases. [1] Like other affected countries, both Turkish economy and society have been affected by the virus in a significant way. Despite the significant progress in their bilateral relations since the end of the Cold War and the medical cooperation between Turkey and China, the perception of China in Turkey has since been affected. A number of endogenous and exogenous factors have contributed to this development.

According to an analysis of the speeches delivered by the members of the Turkish Grand National Assembly, during the pre-pandemic era, China’s impression in Turkey appeared to be comparatively more positive than today. [2] China was mentioned positively 235 times and negatively 502 times between 1999-2019 (see table below). The mentions cover topics like foreign policy, the situation in China’s Xinjiang Uyghur Autonomous Region (XUAR), economic exchanges, tourism, cultural relations, human rights, and visa-related issues. Although China’s image has improved over time, recent events in the XUAR have affected China’s reputation. Other issues have long influenced negatively the way China is perceived in Turkey, such as the Chinese growing trade surplus and the perceived low quality of many Chinese goods.

The Chinese and Turkish governments have long taken action to boost their relations, especially since the launch of the Belt and Road Initiative (BRI) in late 2013. The BRI is expected to offer plenty of opportunities for both sides through the strengthening of bilateral relations. Figure 1 shows how Chinese investments in Turkey have consistently grown over time—particularly since 2008—and thus, providing a solid foundation for cooperation within the framework of the BRI. Turkey’s unstable ties with the West, especially with Europe, have played an important role in the Sino-Turkish relations, with China emerging as a potential alternative.

Against this background, new high-tech goods imported from China have contributed in changing the way Turkish customers regard Chinese products. [4] Turkey has become one of the most important markets for companies such as Lenovo, Huawei, Oppo, and Xiaomi. Huawei was awarded the top customer satisfaction award in March 2020. [5] Xiaomi is also expanding its presence—even at the expense of Huawei. Huawei smartphones used to be the most popular in the market until 2019, but Xiaomi surpassed it in first half of 2020. [6] Oppo, too, is having significant success. Its sales in the Turkish market were higher than those in the European markets in 2019. [7] ‍

Building new connections beyond trade is very important for Chinese and Turkish officials. Thanks to the efforts of the Chinese embassy in Ankara and the consulate in Istanbul, as well as the Confucius Institutes, Chinese culture is being promoted with great enthusiasm in Turkey. Especially in the past decade, Chinese media organizations have also started to broadcast their programs in Turkish. For example, China Radio International (CRI) Turk began doing this in 2004. [9] While CRI Turk has been broadcasting in Turkey since 2016, Xinhua News launched its website in 2017. [10] CTV has also been broadcasting across Turkey since 2014. [11] Moreover, these media organizations also cooperate with local press houses. [12] For example, Kırmızı Kedi Presshouse has been publishing the quarterly Silkroad Magazine since 2017. Lastly, Chinese officials are active on social media platforms such as Twitter and Instagram and consequently, have impacted how Turkish youth look at China. All these actions, especially the newly established presence of CRI and Xinhua, have been positively shaping China’s image in Turkey. Among the countries in the Middle East that are surveyed by the Pew Research Center (Figure 2), Turkish perception of China remains the least favorable. However, it seems that the renewed efforts made by China and Turkey to bolster their relations have acted in their favor as positive views have significantly increased in 2017 and 2019 compared to those in 2015.

The first case of COVID-19 in Turkey was officially announced on March 11th. Like other countries around the world, Turkey also became a target of China’s health diplomacy. Different Chinese institutions made a contribution to these efforts. The Shanghai government, for example, sent aid to Istanbul. [14] The Bank of China sent 44 boxes of medical equipment to Turkey on March 26th. [15] On March 28th, ICBC Turkey announced that it would donate medical supplies and financial aid worth about USD 100,000 to support Turkey in the combat against the new coronavirus. [16] Huawei has sent 200 thousand medical masks, 5,000 N95 masks, 5,000 protective glasses, 5,000 protective clothing, and 100,000 medical gloves to Turkey on March 30th. [17] During the pandemic, the Chinese embassy and consulate were also extremely active on Turkish media and social media.

Turkey and China kept close high-level contact. On March 26th, the Science Committee of the Turkish Ministry of Health held video conferences with Chinese officials and scientists to exchange insights about the new coronavirus. [18] Turkish President Erdogan and Chinese President Xi had a phone call to discuss the fight against COVID-19 on April 9th. [19] On April 21st, the foreign ministers of the two countries had another phone call to strengthen bilateral cooperation against the pandemic. [20]

However, it seems that some new critical views are emerging in Turkish public opinion towards China. Some commentators in Turkey believe that China is responsible for the spread of the new coronavirus around the world. [21] In some cases, criticism toward China was not limited to this or to China’s influence on the World Health Organization. [22] Turkish media produced a number of reports about wild animals being considered delicacies in some regions of China. [23] The seriousness of the situation prompted the Chinese consul general in Istanbul, Cui Wei, to explain that bats are not part of Chinese cuisine in an interview with the media. [24]

At the same time, the comments made by the American President Donald Trump regarding the “Wuhan virus” and the “China Virus” also appeared in some Turkish media. [25] Some lawyers, as it happened in other countries, decided to sue the Chinese government. [26] The decision of the Turkish government to evacuate its citizens from China, the cancelation of the tours for Chinese tourist groups, and the news that large numbers of Chinese tourists across Turkey have been put into quarantine might have had a negative effect over China’s image in Turkey. [27] This phenomenon subsequently fueled a series of episodes where members of the Chinese community in Turkey became victims of racism. [28]

A diplomatic misunderstanding might have partially contributed to worsen the general climate. The message used on aid packages sent to Armenia read, “May our friendship be higher than Mountain Ararat and longer than the Yangtze River.” Mount Ararat is located in Turkey but it is an icon for the Armenian nationalist movement. Turkish Foreign Ministry asked its Chinese counterpart for clarification of the message. The Chinese ambassador to Ankara, Deng Li, explained that those aid packages to Armenia had been prepared by local authorities in China and that the message did not represent the position of the Chinese central government. [29]

Interestingly, there are also those in Turkey that see an economic opportunity in the pandemic and the souring of Sino-American relations. According to Dunya, an important business newspaper, due to COVID-19 in China, Turkey is becoming an alternative supplier in many sectors such as tourism; shipbuilding; the production of furniture and machineries; as well as  chemical, leather, and textile products. [30] One of the most significant examples is that of Walmart, which replaced Chinese suppliers with Turkish ones. Others have argued that the shake-up of the global value chains, especially in terms of companies reassessing their presence in China, will help the Turkish economy to reposition itself as not only a competitor of China anymore but also a supplier. [31] Other commentators believe that there are opportunities of cooperation between China and Turkey in the post-COVID-19 world, under the framework of the BRI. [32]

It is possible to see that the pandemic brought the Chinese and the Turkish government closer but much of the achievements made by China, in terms of popular perception in Turkey, might have since been negatively affected. This was not the result only of prejudices toward China, such as in the case of the “bat soup,” or diplomatic misunderstandings. The general worsening of the Sino-American relations, too, contributed to this result.

The relations between China and Turkey have developed positively in recent years, though Turkish perception of China is among the least favorable in the region. Especially since the 2010s, renewed economic, political, and cultural engagement between the two countries have had positive effects on how Turkish public opinion look at the Asian country. From growing investments to a larger media presence in Turkey, China has made significant efforts to achieve this result.

However, the spread of COVID-19 has put some strains to these achievements. Worsening relations between China and the United States, biases about Chinese cuisine and traditions, and diplomatic misunderstandings have all played a role in this latest development. Nonetheless, this negative moment is likely to be short-lived. The institutional ties between China and Turkey remain strong; the pandemic should not lead to changes in the relations between the two countries.

Finally, it is important to point out that the pandemic might have some unexpected positive impact on the relations between China and Turkey. As some international companies look for alternatives to China, Turkey is eager to be chosen, as it has already happened in the case of Walmart. This could help Turkey to rebalance its trade relationship with China, which is an important goal for the Turkish government. However, it is still too early to know exactly how Sino-Turkish relations will continue to evolve in the post-COVID-19 world.