The assassination of Qassem Soleimani and the growing tension between Iran and the United States, as seen from Beijing 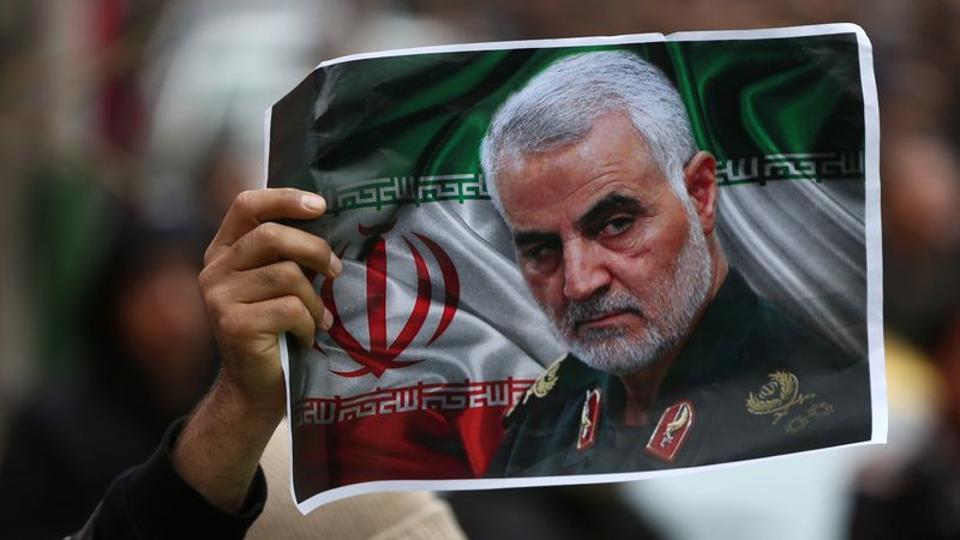 On January 3, 2020 Qassem Soleimani, the head of the Quds Force of the Islamic Revolutionary Guard Corps (IRGC), and Abu Mahdi al-Muhandis, commander of Iraq's Shia Hashd al-Shaabiwas (Popular Mobilization Committee) were killed by a US drone strike in Iraq. The assassination took place in the aftermath of a series of events that had already made the relations between Iran and the United States extremely tense. On December 27, an American defense contractor was killed in a rocket attack on the Iraqi military base in Kirkuk launched by Kataib Hezbollah (KH), an Iranian-backed Shia militia group. As a result, the United States carried out a series of retaliatory airstrikes against KH in Syria and Iraq, targeting weapons storage facilities and bases used to plan attacks on coalition forces, killing 25 people. In response to the airstrikes, protesters stormed the US embassy in Baghdad on 31 December. In retaliation for the Iranian top general’s assassination, on 8 January more than a dozen missiles were launched by Iran against Iraqi bases hosting US and coalition troops.

Based on a review of Chinese media and academic articles, this analysis explores how Chinese commentators and analysts have framed the causes and consequences of the assassination of Qassem Soleimani. More data regarding the Sino-Iranian relations and how China’s domestic discourse about Iran has evolved over time can be found here and here, respectively.

(Not) Destined for War

Despite the quick escalation between the United States and Iran, Chinese analysts do not believe that a war between the two powers will break out. However, they agree that Tehran will adopt countermeasures to retaliate against the extreme US pressure. Wang Honggang, deputy director of Institute of American Studies of the China Institute of Contemporary International Relations, does not foresee a comprehensive war between the two powers. That said, both American and Iranian governments are facing severe domestic political pressure that makes it difficult for both sides to adopt measures to ease the tension significantly. [1] According to Sun Degang, professor at Fudan University, neither Iran nor the US will yield, but at the same time neither is willing to engage in direct conflict. If Washington believes that Iran retaliates excessively, he does not exclude the possibility of other US attacks, even airstrikes, on Iranian territory. [2]

Yet, for the moment, Tang Zhichao, Director of the Institute of West-Asian and African Studies (IWAAS) at the Chinese Academy of Social Sciences (CASS), interprets the US decision to increase its troops in the region as part of a strategy of passive defense and the goal to withdraw from the Middle East remains unchanged. [3] Domestic politics, the upcoming presidential elections in particular, was probably the main driver of American actions. According to Liu Zhongmin, Director of the Middle East Studies Institute at SISU, the United States might have tried to link the assault against the US embassy in Baghdad with the 1979 hostage crisis in Iran and the death of the US ambassador in Benghazi in 2012. [4]

Against this background, Iranian actions are described as a show of restrain and an example for other countries that other countries under American pressure can follow. [5] Wu Riqiang, associate professor at the School of International Studies at Renmin University of China, argues that notwithstanding the assassination of Soleimani, the nuclear deal was already slowly dying because Iran did not receive enough support from the EU to oppose US sanctions. [6] Similarly, Zhao Tong, researcher at Tsinghua-Carnegie Center for Global Policy, highlights how Iran was already loosening the implementation of the nuclear deal. At the same time, Iran’s commitment to continuing cooperation with the International Atomic Energy Agency shows that Iran’s decision has been very restrained, indicating that Iran hopes to get the support of the international community on the Iranian issue—especially from the EU. [7]

Another failed attempt to isolate Iran?

The assassination of Soleimani has been justified as an act of self-defense, invoking an imminent threat to US personnel abroad. Nevertheless, no detailed account of the planned attacks against American subjects in the area has been released. Adding fuel to the controversy, the US Secretary of State Mike Pompeo affirmed in a recent speech that assassinating Soleimani was part of a bigger “deterrence strategy.” [8]

In line with the Five Principles of Peaceful Coexistence, the Chinese official response to these events has stressed the importance of respect for Iranian sovereignty and territorial integrity, and the need to ensure peace and stability in the region. The US military actions and threats against Iran and Iraq have been harshly criticized, stressing the disregard of the basic principles of the UN Charter and international law. In a press conference held on January 6th Geng Shuang, the deputy director of the Chinese Ministry of Foreign Affairs’ Information Department of the PRC, criticized the US “military adventurism” (军事冒险主义 Jūnshì màoxiǎnzhǔyì), recalling China’s commitment to seeking a solution through negotiation and dialogue, opposing the use of force in international relations. [9]

In the eyes of Chinese analysts, the drone attack has exacerbated the isolation the US was suffering in the diplomatic scene, whereas Iran has gained the support of the international community. In an article for the Global Times, Huang Jing, professor at Beijing Language and Culture University, argues that the assassination of the Iranian top military leader has eased Iran’s internal pressure in the Middle East by unifying the regional Shiite community, who share strong anti-American sentiment but are internally divided. [10]

This is not the first time that Chinese observers describe an American action against Iran as a failure. In February 2019 the Trump administration intensified its efforts to diplomatically isolate Iran, by convening the Ministerial to Promote a Future of Peace and Security in the Middle East in Warsaw. Germany, France, China, and Russia did not send any representative to the meeting, whereas other European and Arab countries sent low-ranking delegates. As contended by Jing Liangxiang, Senior Research Fellow with Institute for International Strategic Studies, the summit convened to isolate Iran eventually backfired and resulted in US isolation. [11]

What is at stake for China?

China needs stability in the region. Niu Xinchun, Director of the CICIR Institute of Middle East Studies, explains this very well in an article published by the Global Times. [12] A common misconception in the Chinese domestic discourse, he points out, is that turmoil in the Middle East as an opportunity to ease US pressure on China. While it’s true that the US dispatched a large contingent of troops during the Gulf war and the Iraq war (630.000 and 160.000 troops respectively), America has changed its involvement strategy in the Middle East, and no longer engages in large-scale ground operations, as Niu points out.

He also highlights the fact that the losses for China have increased in every war and revolution. The Gulf War forced China to evacuate thousands of Chinese nationals and Chinese companies lost about USD 2 billion. The 2003 American invasion of Iraq created important opportunities for Chinese oil companies but that did not come without cost. The fall of Saddam led to the renegotiation and writing of 80% of the Iraqi sovereign debt owed to China in exchange to re-establish a presence in the Middle Eastern country. In 2011, 36,000 Chinese nationals had to leave Libya and Chinese companies lost an estimated USD 18 billion losses in contracts.

At the same time, US increasing efforts to isolate Iran and the escalation of the US-China trade war have brought Iran and China closer, although this development is described in different terms and with different degrees of enthusiasm in China and Iran. To counterbalance US pressure, Iran started to “Look East,” in an attempt to bolster ties with more countries in the Far East. In an August 2019 op-ed for the Global Times, Iranian foreign minister Javad Zarif presented an extremely positive narration of Sino-Iranian relations, stressing Iran’s support for the “One China Policy” and “One country, two systems” model. [13] On the other hand, Iran tends to exaggerate China’s interest in the region while Chinese media are much more cautious in describing the relationship between Beijing and Tehran. The latest example of this can be found in the December 2019 issue of the ChinaMed Observer, where we can see how the Chinese and Iranian narratives about the trilateral China-Russia-Iran four-day joint naval exercise differ. While Chinese newspapers downplayed the importance of the joint four-day naval exercise, framing them as simple exercises to ensure maritime security, Iranian commentators tend to frame the naval exercise as a first strategic step toward stronger cooperation with China and Russia. [14]

The assassination of Soleimani has caused great concerns in China. Mostly, Chinese commentators blamed the United States for the worsening of the situation. While they described the Trump administration’s foreign policy as failing to unite other countries against Iran, they ultimately praised Iran for showing restrain. The failure of Europeans to support Iran and the nuclear deal further simply justifies Iranian actions. Yet, despite the rising tension, they exclude the possibility of a large-scale conflict.

Chinese officials have harshly criticized the US drone attack in Iraq, and used it to point out Washington’s abuse of force in international relations. In line with China’s discourse on the importance of peaceful development, they have called for negotiation and dialogue to ease the tensions. Yet, besides words of support, China is unlikely to take sides, as it holds diplomatic ties with both Israel, Saudi Arabia and the UAE. The cautious commentaries in Chinese media are symptomatic of China’s uneasiness vis-à-vis the unfolding situation and its desire not to be drawn in, especially as the Sino-American relations remains uncertain despite the recent signing of a “Phase One” trade deal in Washington. Considering the interests at stake if China overtly supports one side, Beijing will probably adopt a two-pronged strategy to balance its relation with the United States and Iran. As Niu Xinchun aptly described, China’s position in the region is extremely delicate and vulnerable to sudden shocks.

[3] "A difficult situation to ease and the dilemma of US-Middle East policy."

[14] Iran is not the only country in the Middle East to push for a positive narration of Chinese interest in the country. In an article written by Andrea Ghiselli and Mohammed Al-Sudairi, they explored the Syrian narrative about China, and the mismatch between the official narration and Chinese real investment in the country. See: Andrea Ghiselli and Mohammed Al-Sudairi, "Syria’s 'China Dream': Between the Narratives and Realities," King Faisal Centre for Research and Islamic Studies, September 17, 2019, pp. 1-7, link.