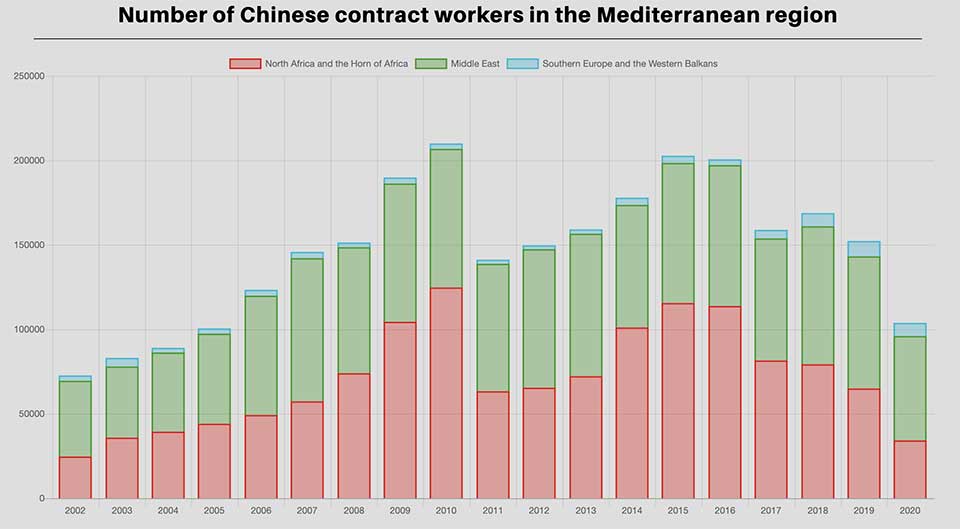 The ChinaMed Project’s newly-updated dataset provides the first insights into the impact that COVID has had on Chinese engagement in the Middle East and North Africa as well as the Horn of Africa regions. The new information confirms that the trade and investment relations between China and the countries of the Middle East, North Africa, and the Horn of Africa weathered the first year of the COVID-19 pandemic mostly unscathed.

The significant decline in the value of Chinese imports from many states in the region may seem to indicate otherwise, but it was mostly due to the pandemic-induced collapse in the price of oil (which even reached negative values in April 2020). Oil prices being a factor is confirmed by two other indicators offered by ChinaMed Data: ‘the value of Chinese energy imports’ which went down noticeably, and ‘Chinese dependence on energy imports’ which instead remained constant.

Regarding investment, ChinaMed Data reports that in 2020 Chinese foreign direct investment (FDI) stock in the Middle East, North Africa, and the Horn grew with respect to the previous year indicating that despite the pandemic China continued to invest abroad, most likely as part of its Belt and Road Initiative (BRI). However, it is important to note the falling values of two other indicators provided by ChinaMed Data, ‘the value of the contracts awarded to Chinese companies’ and ‘the number of Chinese contract workers.’

In both cases, the downward trend began in 2018, though for the number of Chinese workers it only became particularly evident in 2020. We speculate that a mix of factors contributed to this situation. On the one hand, it is extremely likely that COVID-19-related restrictions in China and in the host countries of the region played a role in restricting the activities of Chinese engineering and construction contractors, including the possibility to bring in workers from China. At the same time, the data may also show that China is attempting to respond to the criticism that BRI projects only involve Chinese companies and Chinese labor.

Regarding some individual countries, going from East to West, Iran’s relationship with Beijing is one that has attracted interest especially after the much-discussed signing of the 25-year-long China–Iran Comprehensive Strategic Partnership. While the ChinaMed Data reports that Chinese FDI stock in Iran increased, there was also decreasing bilateral trade, Chinese energy imports, and Chinese energy dependency. Furthermore, the data reports no contracts to Chinese engineering and construction companies and no Chinese contract workers in the country in 2020, though we suspect this might be due to some problems in the reporting process rather than reflecting the reality on the ground. In any case, Iranian sources often point out that the implementation of the strategic partnership is still plagued by a number of problems.

That said, Tehran’s involvement in many regional issues and the fear of being affected by secondary sanctions may limit real Chinese interest in Iran or make Chinese companies not want to disclose their dealings in the country. As we wrote in the most recent issue of the ChinaMed Observer, Iraqi media have reported that difficulties with Iran are indeed a factor explaining why Chinese economic relations with Baghdad have increased so much in the past years. In 2020, China’s dependence on energy imports from Iraq reached 8.8%, Chinese companies were awarded more than $5 billion in contracts, there were more than 10,000 Chinese contract workers in the country, and Chinese FDI stock in Iraq increased to $1.7 billion. The Chinese FDI stock in Iraq is likely to only increase as Chinese firms continue to invest as part of the “oil for reconstruction” deal between China and Iraq and Iraqi participation in the BRI.

Regarding Egypt, ChinaMed Data reports that Chinese FDI stock continued to increase in 2020 reaching a value of almost $1.2 billion. Additionally, $3.2 billion in contracts were awarded to Chinese companies and an estimated 1,891 Chinese contract workers were in Egypt at the end of 2020. Despite some Egyptian frustration caused by Beijing’s cautious attitude towards the Grand Ethiopian Renaissance Dam and imbalances in Sino-Egyptian trade relations, this trend of strengthening ties between Beijing and Cairo is likely to continue in the following years as the two countries cooperated heavily in the fight against COVID-19. For example, in late 2021, Egypt announced its plans to manufacture one billion doses a year of China’s Sinovac vaccine with China’s help.

Down the Nile, Ethiopia, the centerpiece of Beijing’s Africa policy, was experiencing increasing Chinese FDI with it reaching almost $3 billion in terms of FDI stock in 2020. Additionally, that year Chinese companies were awarded contracts valued around $2.6 billion and there were over 8,000 Chinese contracts in the country. However, Chinese involvement in Ethiopia may likely be affected by the country’s current civil war despite Beijing’s vocal support for the Ethiopian government.

Leonardo Bruni is a research fellow at the ChinaMed Project.

This analysis was originally published in The China Africa Project.