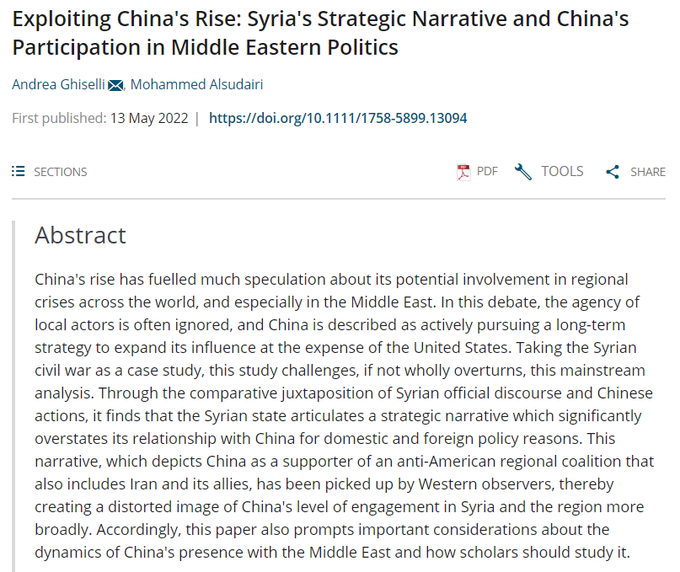 Andrea Ghiselli (Fudan University and ChinaMed Project) and Mohammed Alsudairi (King Faisal Center for Research and Islamic Studies and Hong Kong Institute for the Humanities and Social Sciences) published a new research article on Sino-Syrian relations in Global Politics, part of a special issue edited by Enrico Fardella and Brandon Friedman, which can be accessed from here.

China's rise has fuelled much speculation about its potential involvement in regional crises across the world, and especially in the Middle East. In this debate, the agency of local actors is often ignored, and China is described as actively pursuing a long-term strategy to expand its influence at the expense of the United States. Taking the Syrian civil war as a case study, this study challenges, if not wholly overturns, this mainstream analysis. Through the comparative juxtaposition of Syrian official discourse and Chinese actions, it finds that the Syrian state articulates a strategic narrative which significantly overstates its relationship with China for domestic and foreign policy reasons. This narrative, which depicts China as a supporter of an anti-American regional coalition that also includes Iran and its allies, has been picked up by Western observers, thereby creating a distorted image of China's level of engagement in Syria and the region more broadly. Accordingly, this paper also prompts important considerations about the dynamics of China's presence with the Middle East and how scholars should study it.