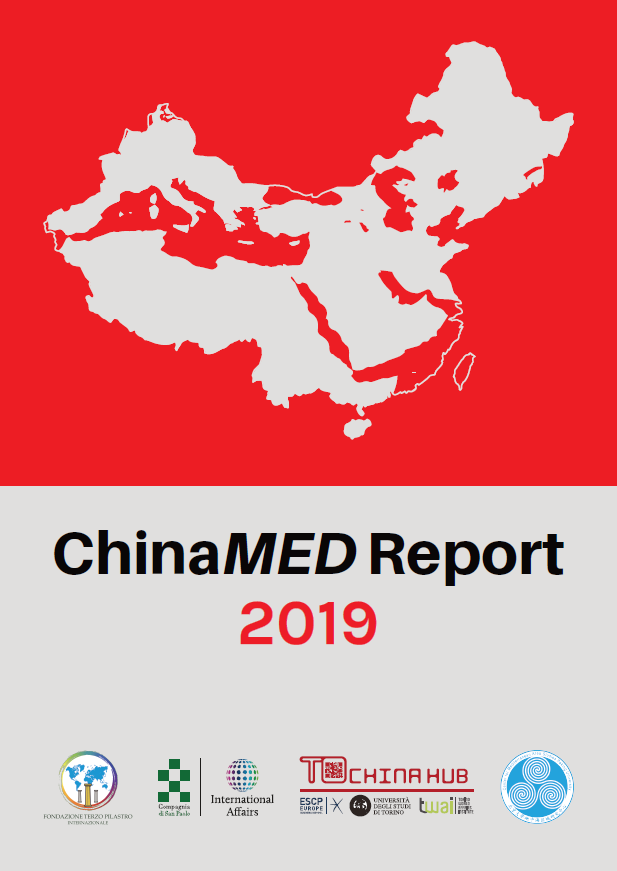 The ChinaMed Report 2019: China’s New Role in theWider Mediterranean Region was presented in Rome on October 28, 2019, during the ChinaMed Symposium 2019.

Edited by ChinaMed's Prof. Enrico Fardella and Dr. Andrea Ghiselli, the chapters of the Report were written by scholars from China and countries of the wider Mediterraean region in order to present various aspects of the Sino-Mediterranean relations.

How does China’s growing global role affect the current dynamics of the Mediterranean region? This report aims to answer this question by exploring the most recent trends in the relations between China and the countries in the greater Mediterranean region.

China’s "march" towards the region began in the late 1970s and has accelerated each year, expanding its scope from an economic to a political and security horizon. As China’s economy diversified, it required more resources and promising markets; the massive energy basins in the eastern and southern parts of the Mediterranean region and rich developed markets in the northern one seemed a perfect destination for Beijing’s new ambitions. Today, China’s powerful economic presence is a common feature in the vast majority of the Mediterranean countries.

The corollary of this phenomenon, although a most recent one, is China’s growing political influence and its security attachments. The analyses written in this report show that at least one key element can be identified in the approaches and responses of the different countries in the region to China’s growing political influence: the difficulty to place the relationship with Beijing in the context of already existing diplomatic networks and alliances.

The importance of economic and diplomatic diversification

In a moment of great uncertainties, China’s return to the center of the world stage is a certainty for virtually all the decisionmakers in the region. Hence, many countries look at China as an important opportunity to diversify their economy and foreign policy. Disillusionment toward Western countries and slow economic growth are, either singularly or together, the key drivers of this process. To different extents, this is particularly clear in the cases of Morocco, Egypt, Ethiopia, as well as the Western Balkan countries.

The role of domestic factors in Mediterranean countries

Despite the desire to strengthen the cooperation with China, domestic factors and actors can create significant challenges to such development. As in the case of Turkey, public opinion’s positive attitude toward the Uyghurs is a powerful and unpredictable force that government officials cannot ignore and that creates uncertainty in the relations with China. In Israel, it seems that the issue lies in the growing pressure from parts of the Israeli state — which have Washington’s steady support — to establish stricter controls on Chinese investments in the name of national security. The relations between China and the Gulf Cooperation Council (GCC) countries, too, might be close to their limit. Different expectations about regional politics and shifting economic priorities in the Gulf will likely erode the extreme economic complementarity that currently underpins the Sino-GCC ties.

The limits of China’s commitment and ambitions

Notwithstanding the prevailing narrative pertaining the development and ambitious goals of Chinese foreign policy, China does not commit resources and expose itself in favor of a partner easily. Two cases taken into consideration in this report — Greece and Iran — testify to this fact. In the case of Iran, the American withdrawal from the nuclear deal brought to an end the brief honeymoon between Beijing and Tehran. Today, the Sino-Iranian relationship is mostly a function of the relations between China and the United States. Regarding Greece, Athens’ growing awareness that Beijing can play an important role as an investor but not as security and stability guarantor in the light of worrying security trends in the Eastern Mediterranean is behind a general recalibration of Greece’s China policy.

Connectivity, and the Cooperation Between China and Western Balkans

The Belt and Road Initiative: A View from Morocco

The One Belt One Road: A Framework for Egyptian-Chinese Strategic Partnership

The Long-Standing Struggle of Janus-Faced Relations: China and Turkey in the 21st Century,Moving Forward?

An Overview of Sino-Gulf Relations: A ‘New Era’ of Growth and a Future Era of Stagnation?