Algeria and China: Shifts in political and military relations 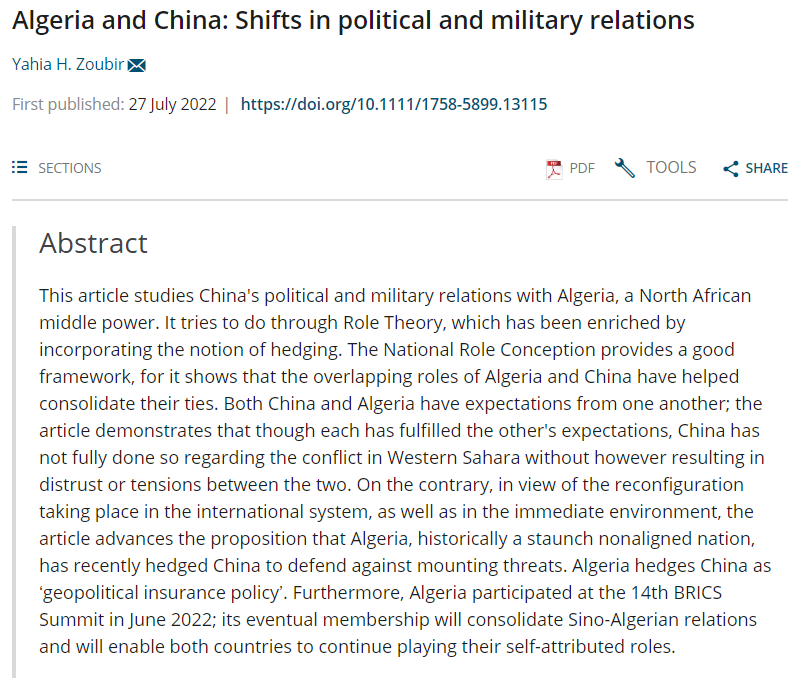 Yahia Zoubir (KEDGE Business School) published a new research article on Sino-Algerian relations in Global Politics, part of a special issue edited by Enrico Fardella and Brandon Friedman, which can be accessed from here.

This article studies China's political and military relations with Algeria, a North African middle power. It tries to do through Role Theory, which has been enriched by incorporating the notion of hedging. The National Role Conception provides a good framework, for it shows that the overlapping roles of Algeria and China have helped consolidate their ties. Both China and Algeria have expectations from one another; the article demonstrates that though each has fulfilled the other's expectations, China has not fully done so regarding the conflict in Western Sahara without however resulting in distrust or tensions between the two. On the contrary, in view of the reconfiguration taking place in the international system, as well as in the immediate environment, the article advances the proposition that Algeria, historically a staunch nonaligned nation, has recently hedged China to defend against mounting threats. Algeria hedges China as ‘geopolitical insurance policy’. Furthermore, Algeria participated at the 14th BRICS Summit in June 2022; its eventual membership will consolidate Sino-Algerian relations and will enable both countries to continue playing their self-attributed roles.