Worse than the Cold War? Euro-Mediterranean Perspectives on Sino-American Rivalry 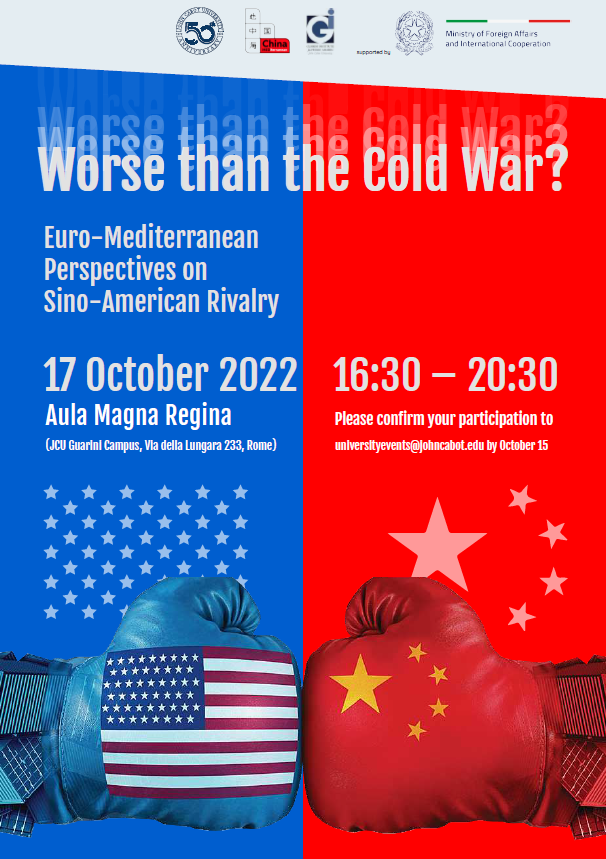 Sino-American rivalry seems speeding fast towards a point of no-return. In the previous years the debate on the growing tension between United States and China – the two majors actor on the world stage – looked back at the Cold War to identify common patterns between present and past great powers antagonism. Fierce Sino-American antagonism however might signal a much more complex transition in global dynamics than the mere repetition of a Cold War-like bipolarism.

Thanks to the Sino-American entente – inaugurated fifty years ago by Nixon’s epoch-making trip to Mao’s China – the U.S. could maintain good relations both with China and Japan, an enormous plus in the American global strategy that significantly contributed to defeat of the Soviet Union in the Cold War against the Soviet Union. Deng Xiaoping’s reform and opening at the end of the 1970s marked the beginning of China’s access in the US-led order under the banners of “peace” and “development” and, while favouring a progressive liberalisation of Chinese society, it set the ground for an unprecedented acceleration in the integration – and interdependence – of the global economy centred on China’s manufacturing power. These dynamics seemed now being turned upside down forcing – in an unprecedented and potentially explosive blend – the worst threat of the Cold War within the delicate veins of a new global economic interdependence.

In this light the war in Ukraine, and its impact on the global economy, seems a mere prelude of the much wider impact of this structural shift. Is the last Taiwan crisis a turning point in this direction? Will the US and China manage to navigate these stormy waters and achieve a new peaceful course of coexistence? Or will the bombastic tones of US and China domestic discourses – boosted by the incoming US mid term elections and CCP 20th Party Congress – will prevail over rational diplomacy and annihilate any peaceful exit strategy?

How will the Euro-Mediterranean actors react to these dynamics? Which role, if any, can they play to smoothen these rising tensions? And lastly, is the existing economic interdependence providing the space for new independent courses in their foreign policy or will they be unavoidably absorbed in this new geopolitical contest? This workshop aims to address these crucial issues thanks to the contribution of a unique set of renowned experts and their interaction with a public of selected practitioners and John Cabot University students.

The recording of the event is available here and here.

It is possible to read a summary of the event by clicking here or here [in Italian].

The recording of the event is available here and here.