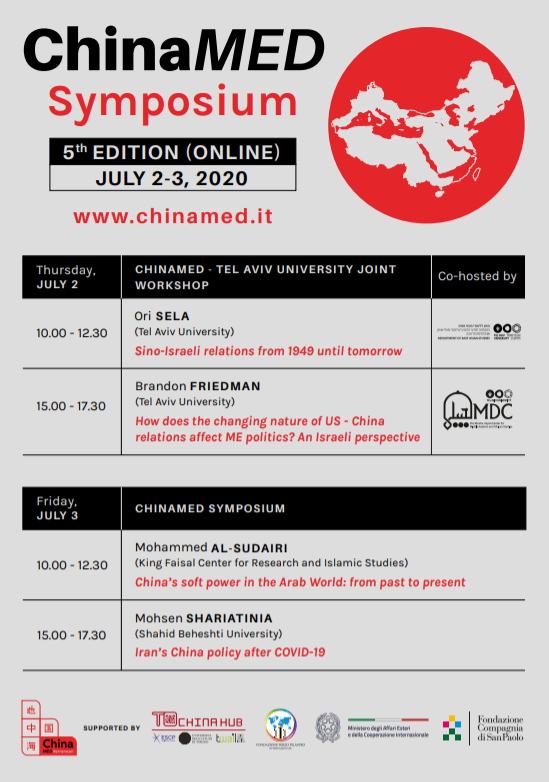 Together with the ChinaMed-Tel Aviv University Joint Workshop, this year's ChinaMed Symposium was held online within the framework of the TOChina Summer School with two days dedicated to the research agenda of the ChinaMed Project.

While the ChinaMed-Tel Aviv University Joint Workshop revolved around the evolution of the Sino-Israeli relations, the ChinaMed Symposium touched upon the evolution of Chinese softpower in the Arab world and Iran's approach to China. Both events offerend unique insights into the role that China plays in the Middle East, and how local perspectives about China have evolved over time.

The speakers of the ChinaMed-Tel Aviv University Joint Workshop were:

Ori Sela is a researcher and senior lecturer in the Department of East Asian Studies at Tel Aviv University, of which he is currently the Chair. He specializes in the history of Early-Modern and Modern China, and is interested particularly in the reciprocal relationship between intellectual history and socio-political history at various crossroads in China's past. The transition from China's imperial era into the nation-state building of the twentieth century, along with the crucial roles history has played and continues to play in current affairs, is another facet of his research and teaching. He works on the history of science and technology in China and is likewise interested in China's military history. Sela received his PhD from Princeton University, published in leading journals, and his 2018 book was awarded the renowned 2020 Levenson Prize.

Brandon Friedman, Ph.D,  is the Director of Research at the Moshe Dayan Center for Middle East and African Studies at Tel Aviv University. Brandon is also the Managing Editor of the Dayan Center’s journal Bustan: The Middle East Book Review. His research interests include contemporary Middle East geopolitical and historical analysis, the history of nuclear weapons in the Middle East, and the modern history of Saudi Arabia. Brandon’s PhD research focused on the political relations between the rulers of the Persian Gulf littoral during the period of British military withdrawal from the region (1968 to 1971).

The speakers of the ChinaMed Symposium were:

Mohammed Al-Sudairi is a non-resident Senior researcher and Head of the Asian Studies Unit. He has a PhD in Comparative Politics from the University of Hong Kong, a double degree (masters) from Peking University and the London School of Economics in international relations and international history, and an undergraduate degree in international politics from Georgetown University’s School of Foreign Service. He is fluent in Arabic, English, and Mandarin. His research interests encompass Sino-Middle Eastern relations, Islamic and leftist connections between East Asia and the Arab World, and Chinese politics.

Mohsen Shariatinia is an assistant professor of International Relations at National University of Iran (Shahid Beheshti) and is a political economy fellow at Institute for Trade Studies, Tehran. His research and teaching work is mainly focused on Iran’s Asia policy and evolving ties between East and West Asia. His research and analyses have appeared in peer-reviewed journals as well as Persian and English outlets.